OPQMauka is written in Python 3.7 and depends on 2 ZMQ brokers as well as a Mongo database. The architecture of OPQMauka is designed in such a way that all analytics are provided by plugins that communicate using publish/subscribe semantics using ZMQ. This allows for a distributed architecture and horizontal scalability.

Mauka utilizes several services that are started as separate processes in order to function. Diagram of these services and utilized ports are provided below. Followed by their descriptions.

All items within the blue box are components that together make up OPQMauka. This first diagram shows how Mauka interacts with other parts of OPQ. 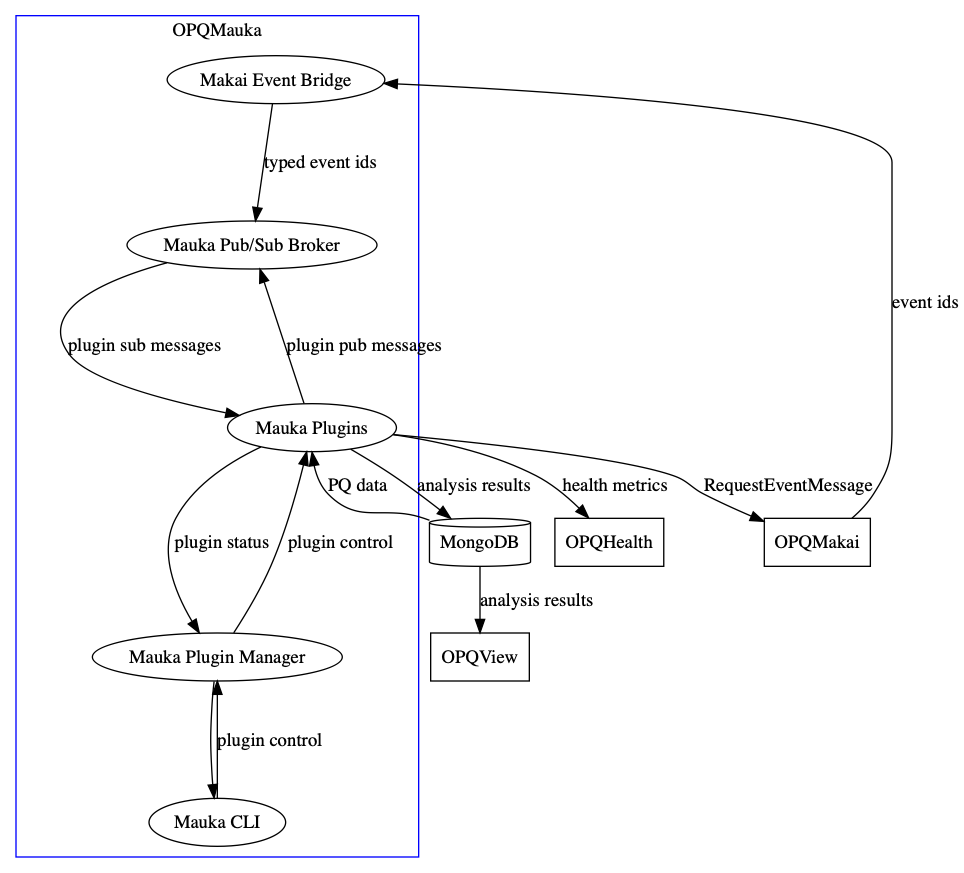 This second diagram displays the port mappings between Mauka components and other OPQ services.

The OPQMauka processing pipeline is implemented as a directed acyclic graph (DAG). Communication between vertexes in the graph is provided via ZeroMQ. Each node in the graph is implemented by an OPQMauka Plugin. Each plugin runs as a seperate process allowing scalability to distributed systems. Additional analysis plugins can be added to OPQMauka at runtime, without service interruption.

Each OPQMauka Plugin provides a set of topics that it subscribes to and a set of topics that it produces. These topics form the edges between vertexes in our graph. Because each plugin is independent and only relies on retrieving and transmitting data over ZeroMQ, plugins can be implemented in any programming language and executed on any machine in a network. This design allows us to easily scale plugins across multiple machines in order to increase throughput.3.

Below is a figure of the current plugin architecture.

The base plugin is a base class which implements common functionally across all plugins. This plugin in subclassed by all other OPQMauka plugins. The functionality this plugin provides includes:

The base plugin produces heartbeats at a configurable amount of time which can be modified using the plugins.base.heartbeatIntervalS configuration option.

The acquistion trigger plugin subscribes to all events and forms event request messages to send to OPQMakai to enable the retrieval of raw power data for higher level analytics.

This plugin employs a deadzone between event messages to ensure that multiple requests for the same data are not sent in large bursts, overwhelming OPQBoxes or OPQMakai. The deadzone by default is set to 60 seconds, but can be configured by setting the plugins.AcquisitionTriggerPlugin.sDeadZoneAfterTrigger key in the configuration. If this plugin encounters an event while in a deadzone, a request is still generated and sent to OPQMakai, however a flag is set indicating to Makai that raw data should not be requested.

The frequency variation plugin subscribes to WindowedFrequency messages and classifies frequency incidents as frequency swells, frequency interruptions, and frequency sags. These classifications can be parameterized by tuning the threshold and duration values that these incidents are fired on.

When thresholds are tripped, frequency events are generated and published to the system. These are most importantly used to generate event triggering requests to OPQMauka to request raw data from affected devices.

The frequency reference is defined by the plugins.FrequencyVariationPlugin.frequency.ref config key.

The number of lull windows can be set with plugins.FrequencyVariationPlugin.max.lull.windows.

The IEEE1159 voltage event plugin subscribes to all events that request data, analyzes the waveforms, and stores classified incidents back in the database. A received waveform is analyzed for continuous segments with non-nominal amplitudes. There are two important features of these segments that are considered for classification: duration and relative amplitude. The duration is the length of the segment in periods and/or seconds. The relative amplitude, which is defined per window (e.g period) of a waveform, is given as the actual divided by the nominal amplitude (where nominal is as specified by country/region).

The IEE1159 documentation specifies incidents by ranges of values for duration and relative amplitudes of a segment. The categories include undervoltage, overvoltage, and interruption (describing events lasting longer than a minute) and instantaneous, momentary, and temporary dips and swells (for shorter timescales). For example, a stretch with relative amplitudes between 0.1 and 0.9 that lasts 0.5 to 30 periods is classified as an instantaneous dip.

The ITIC plugin subscribes to all events that request data, waits until the data is realized, performs ITIC calculations over the data, and then stores the results back to the database.

This plugin subscribes to events that request data and also ITIC specific messages so that this plugin can be triggered to run over historic data as well. The amount of time from when this plugin receives a message until it assumes the data is in the database can be configured in the configuration file.

The ITIC calculations are computed in a separate thread and the results are stored back to the database.

ITIC regions are determined by plotting the curve and performing a point in polygon algorithm to determine which curve the point falls within.

The ITIC plugin uses segmentation to determine segments of stable Vrms values. The Vrms threshold for segmentation is configurable by setting the plugins.IticPlugin.segment.threshold.rms config option.

The makai event plugin subscribes to MakaiEvent messages which contains an integer representing the id of an event that Makai generated and stored to the database. This plugin receives event notifications from Makai asynchronously. When an event notification is received, this plugin goes to the database, reads the raw waveform, and then publishes the raw waveform, calibrated waveform, windowed Vrms, and windowed frequency to any plugins that performs analysis on those data types.

The outage plugin subscribes to heatbeats and on each heartbeat checks queries the health collection of the database to determine if a box has been down for a specified period of time.

If a box appears as down and is not marked as unplugged, then this plugin produces and outage incident which is stored to the database.

The print plugin subscribes to all topics and prints every message. This plugin is generally disabled and mainly only useful for debugging purposes.

The semi f47 plugin classifies voltage incidents according to the Semi F47 standard. This standard was designed to model how voltage dips can cause damage to semiconductor equipment.

The status plugin subscribes to heartbeat messages and logs heartbeats from all other plugins (including itself). Also provides an HTTP endpoint so the status of Mauka, Mauka services, and Mauka plugins can be ascertained by other services.

The plugins.StatusPlugin.port config option can be changed to specify the port that the status plugin should run on.

The total harmonic distortion (THD) plugin subscribes to all events that request data, waits until the data is realized, performs THD calculations over the data, and then stores the results back to the database.

This plugin subscribes to events that request data and also THD specific messages so that this plugin can be triggered to run over historic data as well. The amount of time from when this plugin receives a message until it assumes the data is in the database can be configured in the configuration file.

The THD calculations are computed in a separate thread and the results are stored back to the database.

The [transient plugin] is capable of discriminating between several different transient types. A decision tree is used to prune possibilities by extracting features from the PQ data. The transient classes this plugin is able to classify include impulsive, arcing, oscillatory, and periodic notching.

The following configuration options are used for the transient plugin which shows the options and the default values:

The top level of the opq/mauka directory contains the following files:

The top level of the opq/mauka directory contains the following directories:

To test OPQ Mauka in a development environment, you can use OPQ Sim.

The following steps are required to create a new OPQMauka plugin:

When developing a new Mauka plugin, it's likely there there is already a data source that you can subscribe to. The MakaiEventPlugin publishes both high and low fidelity data streams when events are triggered by OPQMakai. These data streams can be subscribed to by other Mauka plugins. These message types include:

AdcSamples which provide raw ADC samples sampled by the OPQBox.

RawVoltage which converts the ADC samples in raw voltage samples.

RmsWindowedVoltage provides Vrms features from a voltage waveform where Vrms is calculated by cycle.

It's nice to think of Mauka as a perfect DAG of plugins, but sometimes its convenient to dynamically publish (topic, message) pairs directly into the Mauka system.

This is useful for testing, but also useful for times when we want to run a plugin of historical data. For instance, let's say a new plugin Foo is developed. In order to apply Foo's metric to data that has already been analyzed, we can inject messages into the system targetting the Foo plugin and triggering it to run over the old data.

This functionality is currently contained in plugins/mock.py.

The script can either be used as part of an API or as a standalone script. As long as the URL of Mauka's broker is known, we can use this inject messages into the system. This provides control over the topic, message contents, and the type of the contents (string or bytes).

Unit tests should be used to test the analysis functionality of every Mauka plugin. Tests are currently laid out in the following manner.

Every plugin should have a module in the tests/plugins directory that directly tests a Mauka plugin. Every plugin module should be named test_PluginName.py

Each test plugin module must contain a class (which is the same name as the module) that then extends unittest.TestCase.

An example of this layout can be seen at mauka/tests/plugins/test_itic_plugin.py.

To run all unit tests, run python -m unittest discover from the opq/mauka directory. This command will recursively discover all unittests in the tests directory and run them.

When in doubt, ask.

Coala is used to perform static analysis of the Mauka code base. Coala utilizes a plugin architecture to wrap several linters for Python (and other) code bases.

See https://github.com/coala/bear-docs/blob/master/README.rst#python to find information about linters that are supported for Python.

Static code analysis in Mauka is controlled by the .coafile at opq/mauka/.coafile

To perform static code analysis ensure that coala is installed. Change to the mauka directory and invoke coala --ci. This will load the .coafile settings, run the linters, and display any errors tha the linters find. The following is an example of such a run.

Here, we can see the different sections and linters running over the Mauka code base. Let's discuss each of the sections in detail.

Configuration for Mauka's static analysis is performed in the opq/mauka/.coafile file.

The mauka section sets up ignored files and files that need to be linted. In our case, we want to ignore the auto-generated protobuf files and the tests directory. We want to lint all other files under mauka/ that end with the .py extension.

mauka.spacing ensures that all whitespace consists of space characters and not tabs.

mauka.pep8 ensures that the code base conforms to Python pep8 standard. We make one change which is to set max line length to 120 characters.

mauka.pylint runs pylint over the Mauka code base which catches a wide range common style and bug prone code. We disable C0301 since this already checked and configured in the mauka.pep8 linter. We also disable C1801 which disallows the following:

in favor of the more Pythonic

which tests if the collection is empty directly using the if statement. This issue with this approach is that this idiom does not work for numpy arrays. These are so prevalent in our code that we decided to use the len(collection) idiom to test for all empty collections since this approach does work with numpy.

mauka.bandit performs security checks over the code base. B322 is disabled since it only applies to Python 2 code bases.

Please see Building, Publishing, and Deploying OPQ Cloud Services with Docker for information on packaging up this service using Docker.