Power quality is a very complex subject, but to understand the overall goals of the Open Power Quality project, a simplified understanding should suffice.

In OPQ, we are concerned with measuring the quality of power from a wall outlet, which means we focus on an approach to providing a kind of power called "alternating current" (AC). The following image illustrates what "perfect" quality AC power for U.S. wall outlets might look like: 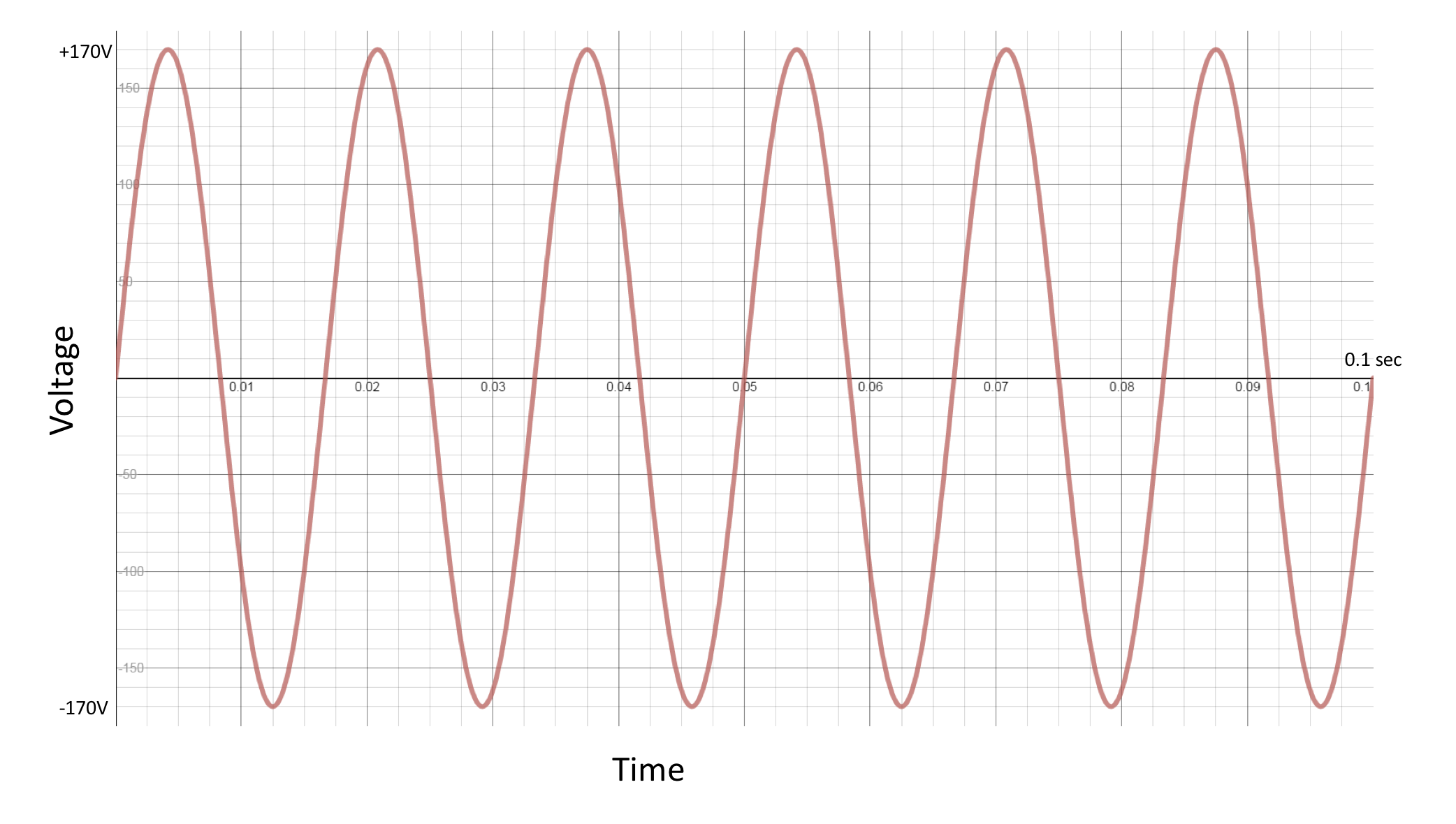 This image illustrates three criteria that must be satisfied for AC power in US households to have "perfect" power quality:

Even though voltage does not have a constant value in alternating current, it is useful to have a measurement consisting of a single number for voltage. By convention, a measure called "root mean square" (RMS) is used to represent the voltage in an alternating current, as it generally corresponds to the "average" value of the voltage. RMS Voltage for AC turns out to be approximately 70% of the maximum voltage, so the RMS voltage in our example is 170 Volts * 0.7 = 120 Volts. Put another way, if power is specified as 120 Volts RMS, then the voltage is actually varying between +170 Volts and -170 Volts. In the remainder of this discussion, we will use "Volts" as a shorthand for "RMS Voltage".

So, in the US, the standard for power from a wall outlet is 120 volts, 60 Hz AC. (Parenthetically, other countries have different standards. Australia uses 240 Volts, 50 Hz AC. Japan uses 100 Volts but some regions use 50 Hz AC while others use 60 Hz AC. For a full list, see List of Worldwide AC Voltages and Frequencies). 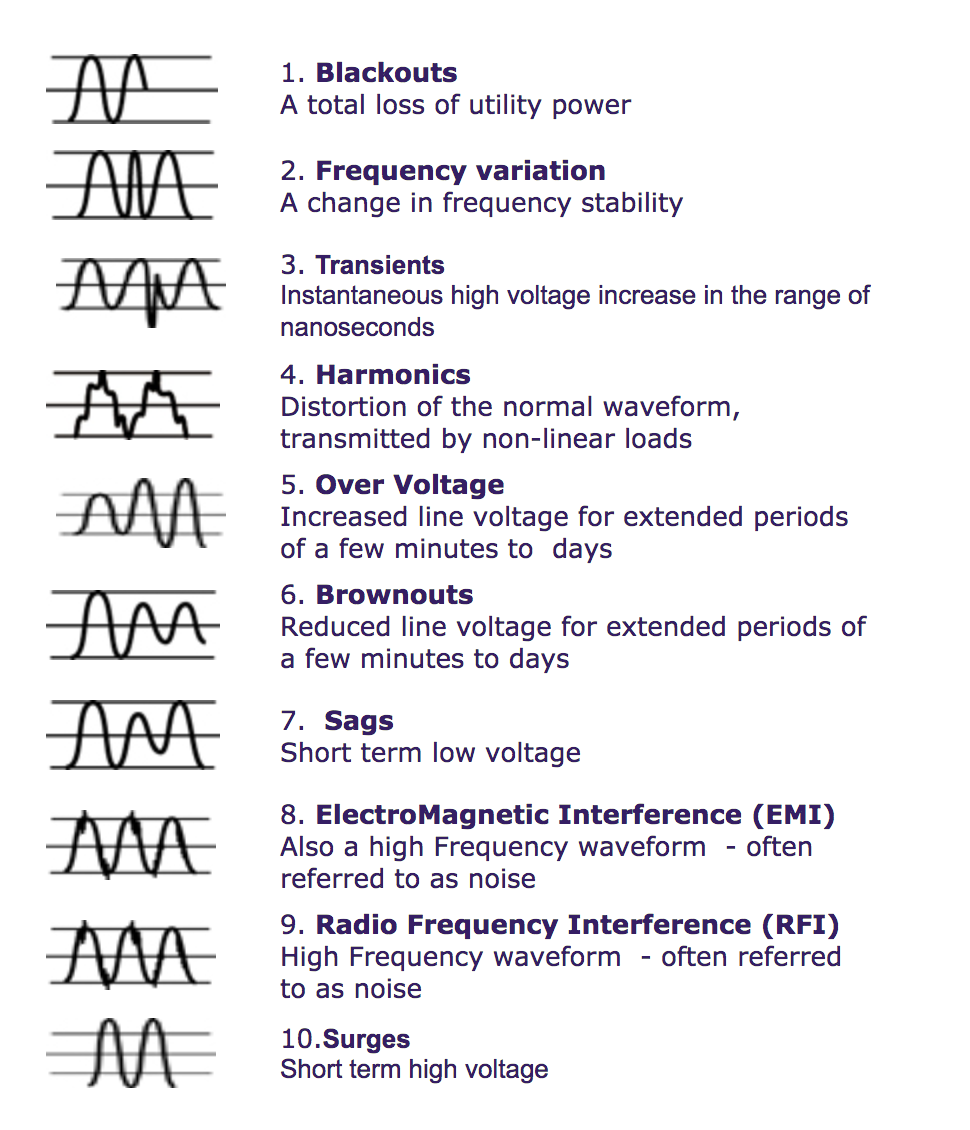 As you can also see from this list, power quality problems are typically characterized by two things: (1) a change to the waveform, and (2) how long the change lasts. For example, a "transient" only lasts a matter of nanoseconds, while a "brownout" lasts at least a few minutes. 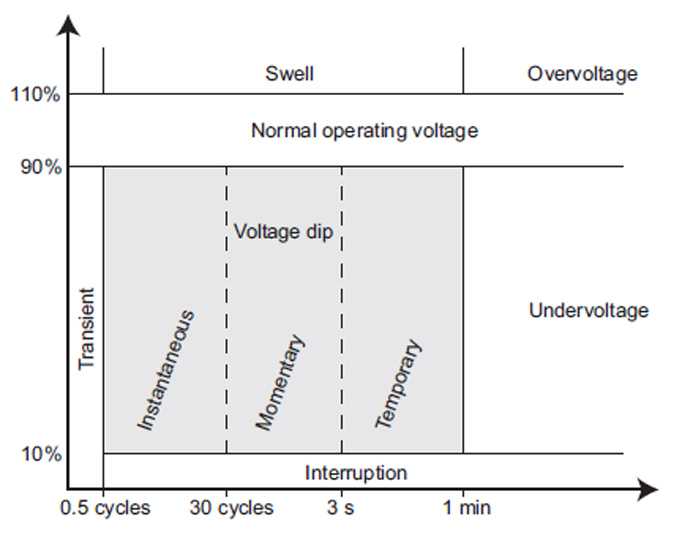 There are several power quality measures not currently calculated by OPQ Box, including power factor, telephone influence factor, flicker factor, and unbalance factor. Future research will determine if these metrics are important to achieving the goals of this project.

So, we know what constitutes "perfect" AC power, and we know the some of the common ways power can fail to achieve it. But why isn't power always perfect?

First, let's look at frequency. As noted above, in perfect AC power in the US, voltage swings from +170 volts to -170 volts exactly 60 times a second. To understand why deviations in this frequency might occur, it is helpful to understand how this frequency value is established and maintained.

For large electrical grids, the frequency of AC power is defined by the speed of rotation of large AC generators, typically 3600 RPM for gas turbines. As demand for power fluctuates on a second by second basis, the speed of rotation will speed up or slow down in response, but utilities have become very good at maintaining the rotational velocity of their AC generators in the face of normal fluctuations in demand. So, for frequency to deviate significantly from 60 Hz, normal control procedures must have failed to keep the generators at their standard RPM. This can happen, for example, if demand for power exceeds the limits of the utility's capacity to provide it, or if sections of the grid suddenly disconnect from the main power sources.

Thus, because frequency is established and controlled at the source of power generation, substantial deviations from normal frequency values are traditionally rare in large electrical grids where most power is centrally generated and controlled by the utilities.

Interestingly, the rise of distributed renewable energy generation means that frequency deviation has the potential to become a bigger issue. If a substantial percentage of the power being provided to the grid is not provided by the large AC generators, then they might cease to dominate the way frequency is established and maintained.

As noted above, voltage sags and swells are brief deviations from the normal swing in amplitude of the AC sine wave. By "brief", we mean from milliseconds to a second or so in duration. Fundamentally, voltage deviations occur when power generation into the grid does not match power consumption from the grid.

In contrast to frequency, which is established and controlled at the origin of power generation, voltage sags and swells can be caused at the end point of the electrical grid where the power is being consumed. Voltage sags can be caused by rapid increases in loads due to things like short circuits, motors starting, or electric heaters turning on. They can also be caused by household appliances drawing too much power in either your or your neighbour’s homes. Voltage swells can be caused by an abrupt reduction in load on a circuit, or by faulty wiring such as a damaged or loose neutral connection.

Distributed renewable energy sources like rooftop solar have the potential to cause local voltage sags and swells because they are generating power and placing it into the grid. If the utilities cannot control their centralized generation appropriately, then power consumption will not match power generation and a voltage sag or swell will result.

Transients can be caused by loose connections, lightning strikes, strong winds causing lines to clash, trees touching the line, vehicle accidents involving powerlines, or birds or other animals on the lines.

Not surprisingly, various standards have been developed to characterize power quality. Here are some of the most prominent. 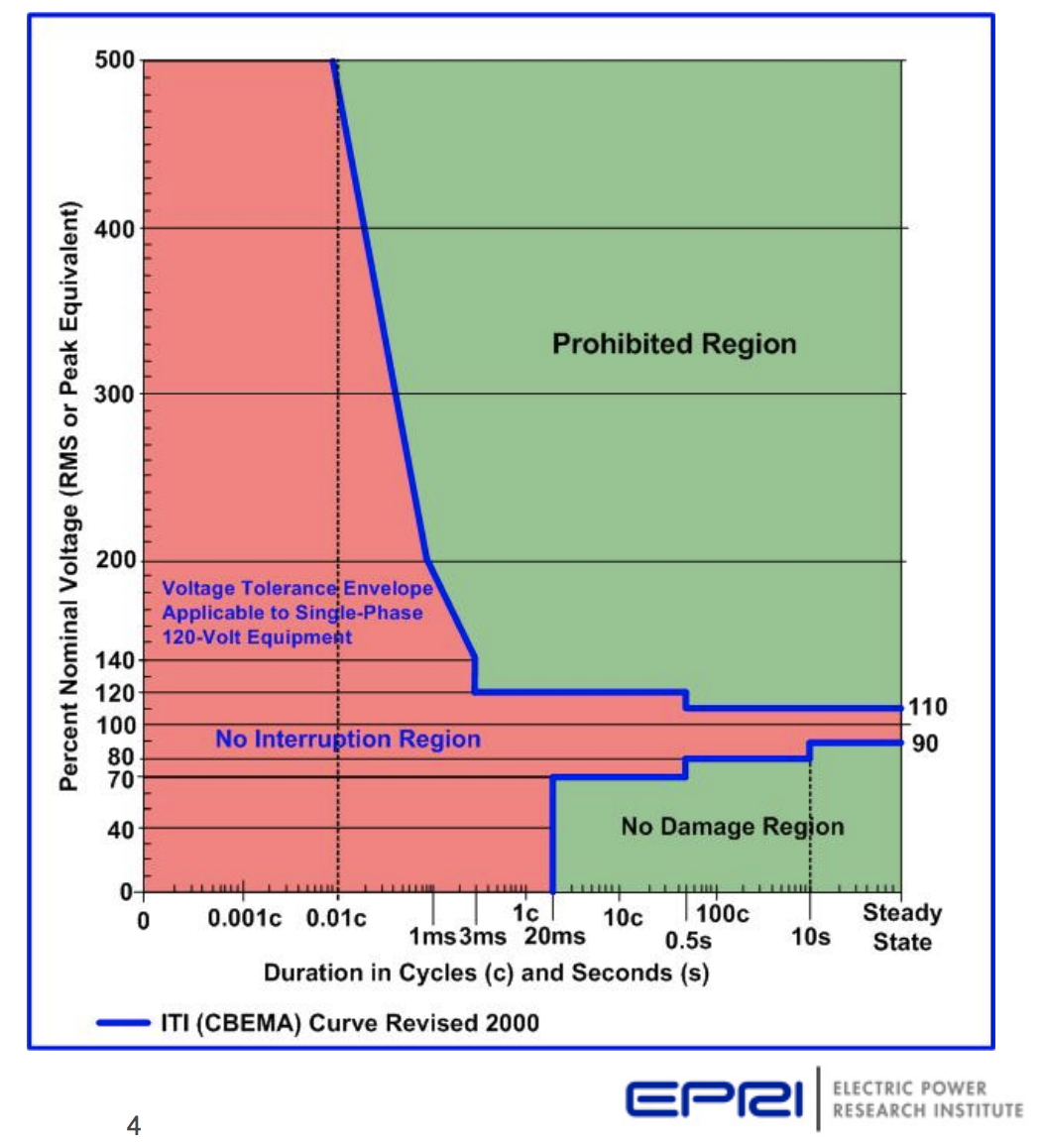 Note that this standard is simply a recommendation, and there is no requirement that electronic devices actually observe this tolerance to voltage deviations. The ITIC Curve is a revision of the similar standard called the "CBEMA Curve" developed by the Computer Business Equipment Manufacturers Association in the 1970's.

In the case of OPQ, we are gathering power quality data to support goals such as the following:

(1) Consumer awareness of the potential impact of their power supply on their electronics. For example, computers are subject to data errors, crashing, or even destruction as a result of voltage deviations such as transients. This damage can be immediate, or the cumulative impact of multiple transients over time. OPQ increases consumer awareness about whether poor power quality could be a cause of any electronic problems they are experiencing.

(2) Impact on policies regarding distributed renewable energy. As noted above, incorporation of large amounts of distributed renewable energy can have adverse effects on both frequency and voltage. OPQ provides a novel, easy to deploy mechanism for gathering data about the quality of power, which can be used in conjunction with other data sources (network topology, solar insolation, wind speeds, other environmental factors) to improve modeling and thus ensure that renewable energy sources are being used as much as possible.

The folks over at Open Energy Monitor have produced an excellent tutorial on AC Power which goes into resistive vs reactive loads and real vs. reactive vs. apparent power.